Allegations of research misconduct are investigated in the research organisation.

The Finnish National Board on Research Integrity TENK has the mandate to evaluate research practices in Finland with regard to research integrity and research ethics. In collaboration with the research community, TENK has produced the Responsible conduct of research and procedures for handling allegations of misconduct in Finland (PDF), also known as the RCR guidelines (in Finnish "HTK-ohje").

Research communities in Finland have voluntarily committed to adhering to the guidelines of responsible conduct of research, defined in the RCR guidelines. The Finnish model of investigating research misconduct is thus based on self-regulation. Other important baselines of the Finnish model are openness, transparency and trust between researchers and research organisations.

Suspected RCR violations are investigated in that research organisation where the alleged incident has occurred. If the person accused of misconduct or the instigator of the allegation are dissatisfied with the outcome of the investigation, they can request a statement from the Finnish National Board on Research Integrity TENK.

TENK’s other key tasks include promoting the responsible conduct of research and formulating and publishing research integrity guidelines in collaboration with the research community. TENK also collects data on RCR violations, and thus monitors the state of good scientific practice and research integrity in Finland.

How research misconduct is investigated in Finland

The investigation of research misconduct is known as the RCR procedure. The RCR procedure starts with a written notification, submitted by the person who suspects foul play to the organisation where the research in question has been conducted. The director of the organisation (usually the rector) then processes the notification. The rector may start an investigation also when an allegation comes to their attention through other channels. 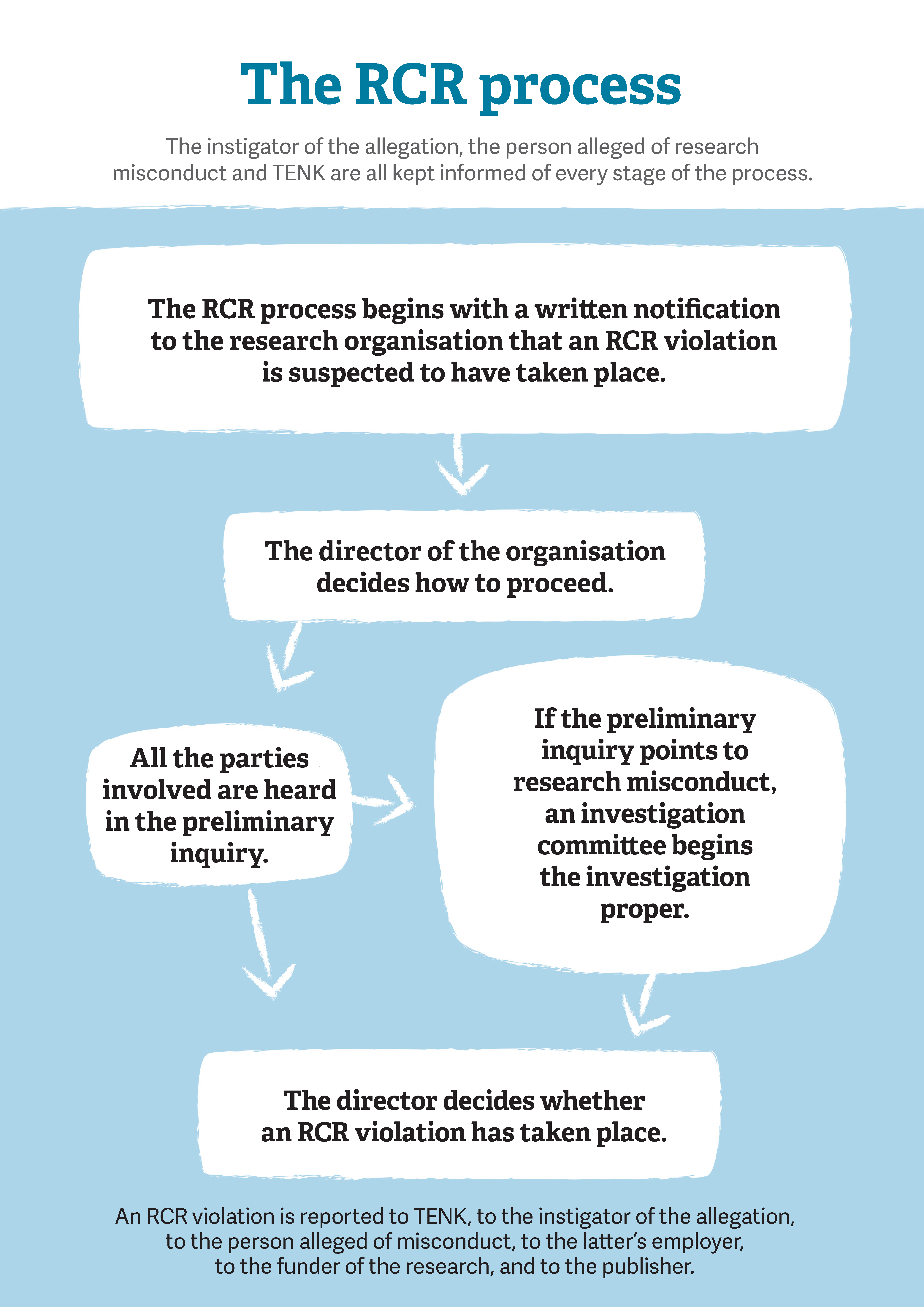 Download the description of the RCR process as a pdf.

The investigation committee submits a report on its work. The rector then asks the person accused of misconduct and the instigator of the allegation to submit responses to the committee’s report.

Finally, the rector decides whether or not an RCR violation has occurred. The parties involved and TENK must be informed of the rector’s decision. If the person accused of misconduct does not work in the research organisation where the allegation has been investigated, or if they receive external research funding, the final report is also submitted to the relevant employer or funding organisation.

TENK does not participate in the preliminary inquiry or in the investigation proper.

Requesting a statement from TENK

If the person accused of misconduct or the instigator of the allegation are unhappy with the outcome or with the process of the investigation, they can request a statement from TENK within six months. TENK processes the statement request and asks the parties involved to submit their responses. The person who has requested the statement can comment on these responses.

TENK evaluates whether the research organisation has conducted the investigation in compliance with TENK’s RCR guidelines. If so, TENK can comment on whether a violation of the responsible conduct of research has been committed. TENK may also advise the rector to initiate an additional investigation. 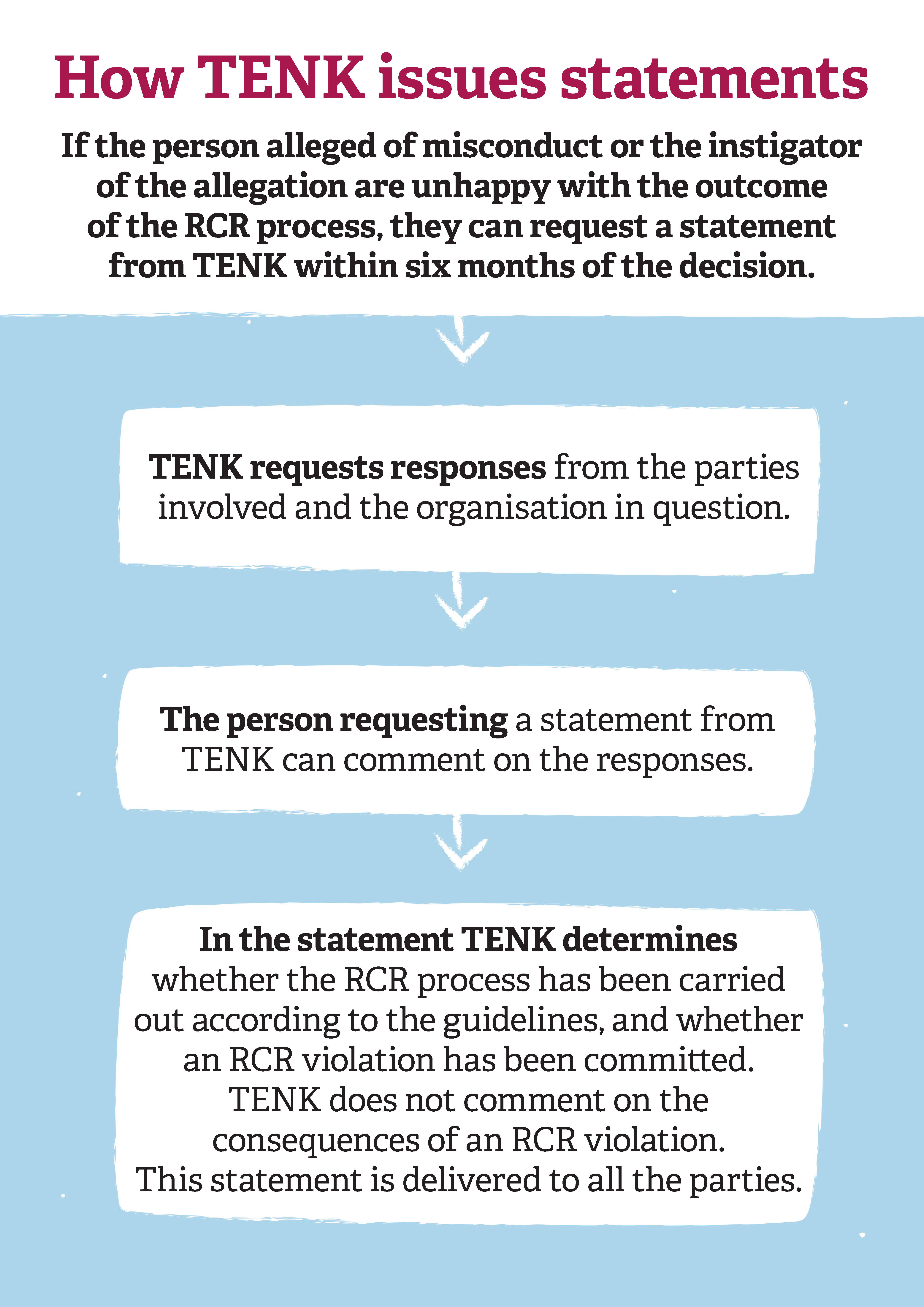 Download the description of TENK's statements as a pdf.

TENK does not address alleged violations of the law, such as copyright law or patent law. Furthermore, TENK does not comment on any events which have taken place after the initiation of the RCR process. TENK does not take into account additional information that is submitted to TENK after the process has already been initiated.

For well-founded reasons, TENK may propose a further investigation on its own accord, without being requested to do so.

Read more on requesting a statement from TENK